The Most Aggressive Fish on the Reef

Home » Blog » The Most Aggressive Fish on the Reef

Our diving guests sometimes ask me: What’s the most aggressive fish on the reef? They then probably expect me to start spinning some yawns about sharks, barracudas or Goliath gropers. But they are mistaken: by far the most aggressive fishes on the reef are the damselfishes. And amongst them, I think that Plectroglyphidodon lacrymatus is the most aggressive one. This fish occurs in the shallow part of the reef top, sometimes less than a meter deep. It fiercely defends its algae patches on the lime stone patches in the part of our house reef which is barely underwater at low tide. Given the fish’s aggressive attitude, I am surprised that our dive boats make it safely to shore every day. It is certainly not hesitating to attack divers. Fortunately the fish is only about 10 cm long and a few tens of grams heavy. When going up against a diver, it hence aims to fight someone with more than 1000 times its own body mass! Not even Chuck Norris is known to fight adversaries a thousand times heavier than himself.

Here is this super aggressive fish: 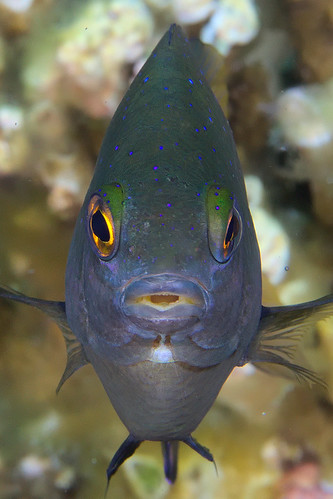 I did not linger too long after taking this shot of an already very irritated white spotted devil.

While P. lacrymatus is the winner in the reef fish aggression competition, other damselfish are not far behind. I have gotten bitten and headbutted by damselfish underwater multiple times. These guys are the Mike Tysons (bite) and Evander Holyfields (head-but) of the underwater world. In one instance, in Anilao/Philippines, a panda anemone fish swam over to me from about 5 meters away to ram my forehead. The much loved anemone fishes are indeed also damselfishes.

When damselfish are breeding, they are extra aggressive, since many species guard the eggs they attach to a piece of rock in their territory.

So, people, please protect the sharks but fear the damselfish!

Don’t hesitate to check out my marine bio workshops for interested laypeople at Savedra!

About the Author: Kalle