How do you take a picture of an interesting looking street artist? Be it a juggler or a musician or one of these odd people who stand absolutely still for long periods of time? Would you run up to the guy, maybe poke him a bit with a stick to get his attention and only then press the shutter? Would you have your friend pull the guy out of his street corner into the open, so that you can get a better shot?

No, you wouldn’t do any of these things. You would show some respect. And I try to do the same thing underwater as well. There is little I dislike among dive gear as much like the “poking stick”: a ~20 cm metal stick sometimes carried by divers. I have seen octopi and moray ells harassed with it, and corals stabbed by it. I have seen fragile frog fish knocked over by poking stick using divers. Of course not all poking stick users are bad: when used carefully it can be a sensible tool to point at otherwise hard to spot tiny marine animals, or to support yourself against a piece of dead bottom (sand or rock). I have seen many divers and dive guides use the stick in a sensible way. But in the hand of an overly ambitious photographer with bad buoyancy the stick is, to quote a friend and fellow diving professional, “of the devil”.

And it’s not just stick use. I don’t chase turtles, I don’t touch corals and I certainly don’t move sea slugs to a more photo friendly position!

Why do I even care if a moray eel gets harassed in its crevice or a turtle gets chased away from its feeding spot among the soft corals? For two reasons. When I dive, I want to behave like a guest in the ocean. I want to admire, but don’t frighten anyone and not break anything. I wouldn’t want to do these things in the house of a human host! I don’t want to leave the animals I enjoy watching and photographing traumatized by my presence. It just feels wrong. I always try to convey this concept of respect for the marine life during my photo workshops.

And secondly, as a nature photographer, I want to shoot animals in as un-stressed states as possible. I want them to do their thing, and notice me as little as possible. I really enjoy photographing animal behavior: mating, feeding, digging, territorial fights. Fish and other ocean animals only do these things when they are not freaked out by a diver with bad intentions or poor control of his position in the water. Then they take off as fast as they can and interrupt their natural behaviors. The thresholds for spooking are very different: the aforementioned turtles are very placid animals; some of the timid needle fish near the surface on the Savedra house reef I have not managed to photograph despite very calm approaches.

Here are some of my marine life behavior shots from the last few years. Enjoy! All un-spooked animals which lived their lifes in front of my lens (this is a slide show, click on it to see the next image): 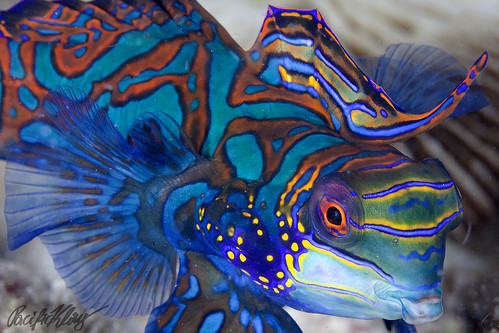 About the Author: Kalle